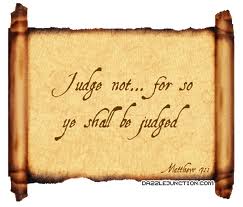 Holy hyperbole, Batman. A television news talking head discussing the remarks Pope Francis made about not judging gay people, actually asked "Do you think he's breaking with the Vatican?"

Pope Francis was stating, in conversational terms, how every Christian should view any person. His rhetorical question asks, "What makes me so special, that I can judge another?" This merciful attitude is the meat of Matthew 7, which goes on to advise us to tend to our own issues and not concern ourselves with other people's business. You know, stop worrying about a speck in your neighbor's eye when there's a plank in your own. If you haven't read Matthew's gospel, chapter 7, I say give it a go. You don't need to be Catholic, or even Christian, to get the benefits from it. It's hard-hitting stuff that speaks to each of us in plain language.

The gospel's call to compassion doesn't change the fact that the Catholic Church clearly teaches that homosexual acts are sinful. This is not a discriminatory doctrine towards gays; heterosexual acts are equally sinful if they occur outside of marriage. That's just a fact.

So although his tone and manner are gentler, the pope is by no means taking a new direction. He's going by The Book. The source document, the gospel, is nearly two thousand years old. This timeless instruction is from Jesus himself. It boils down to the fact that there is right, and there is wrong. Gay or straight, every human being has sinned. So let's each of us take care of our own mess, and let the other guy take care of his. That's basically all Pope Francis was saying,

The extent of the media's ignorance of the Catholic Church never ceases to astonish me. In today's technological world, it signals a true laziness as well, because anyone who can open Google and enter a search term could find out the basic facts of any Catholic teaching. Evidently, that's too much trouble for reporters chasing a juicy headline.

So it has been with the media, and so it will continue to be. Like eternal truth, some things don't change.