Theodore Roosevelt was one of the most noteworthy presidents of the United States. He's one of the four outstanding chief executives carved into Mount Rushmore. 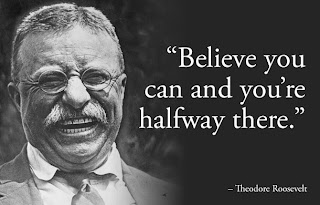 "Teddy" Roosevelt is considered by many scholars and historians to be our first modern president. He was a supporter of desegregation and women's suffrage. He also deserves a special place in heaven for preserving vast areas of public land by signing the Antiquities Act in 1906. This grew into our national parks system. He was also a fan of wildlife preserves. You could call him the first "green" president. He was a leading anti-war, pro-diplomacy progressive of his time.

Yet I wonder how some of his more notable quotes would be received today. By 21st century standards, Teddy Roosevelt sounds downright conservative--perhaps even like a "neocon."

Below are five statements made by our illustrious 26th president. Read them and then ask yourself what the MSNBC crowd would do with these nuggets of wisdom:

Teddy sounds like quite a conservative Roosevelt. Who knew?
Posted by Kathy Carroll at 4:51 PM