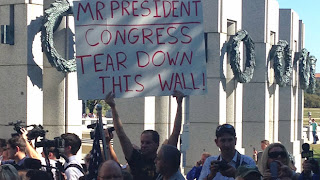 There is more news today--the barricades, which have been moved without hesitation since the shutdown are now wired in place. This is an open-air, privately funded memorial. Yes, that's right--over $200 million in private donations built it, vs. about $15 million in federal money. As Mark Steyn so eloquently puts it, "the feds paid for the grass."

The National Parks Service is following executive orders. A NPS spokesperson stated that the White House's Office of Management and Budget "sends everything down to all other departments. We are part of the Interior. Interior gives us our instructions."

This means that the order to shut down the WWII Veterans' Memorial comes from the White House.

This is more than a mistake. It's an insult to every U.S. veteran, especially our vanishing treasure of WWII vets. The D-Day beaches and Normandy's cemetery for U.S. military have also been closed. These are the mean-spirited acts of a petty bully who is working hard to sink to the level of a tyrant. The veterans themselves, who risked their young lives facing down tyranny, have voiced their opinion of this travesty with their customary courtesy and grace.

But help against the "barrycade" may be on the way. "Honor Riders" to greet and escort veterans have poured into Washington DC. Check out the Facebook page for 2 Million Bikers to DC. This is like watching Sons of Anarchy unfold live in the nation's capital. I hope the president has training wheels.
Posted by Kathy Carroll at 5:15 PM