A Flood of Reaction

I went to see the movie Noah 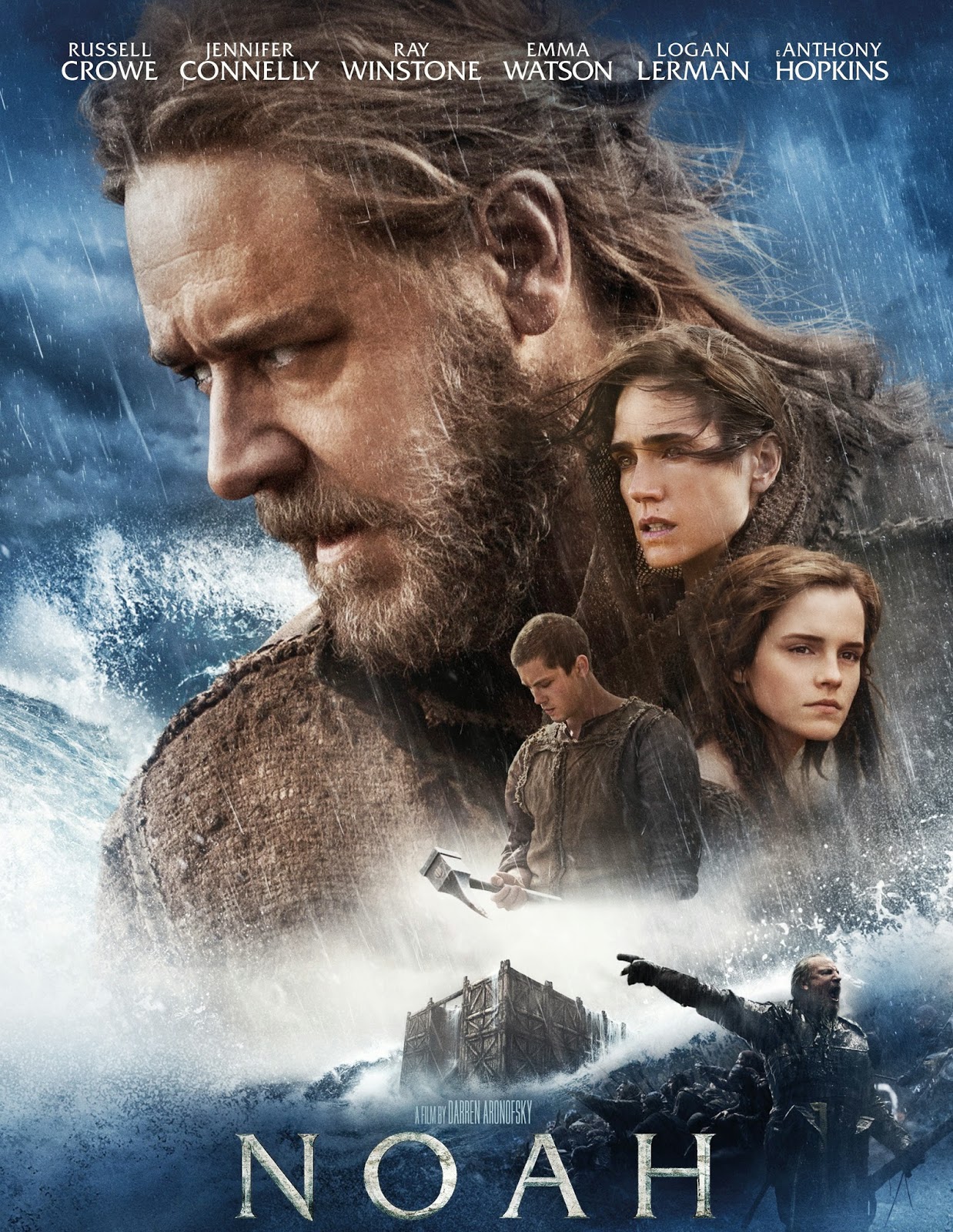 last night. A consecutive two hours and seventeen minutes have rarely absorbed my attention so thoroughly. There are a few semi-spoilers below, so if you'd prefer to see the movie first, stop here and go read Genesis Chapters 6-9 before heading for the theater.

Is it a good movie, you may ask? The short answer is yes. It's a very good movie. The screenwriter and director have taken wild liberties with the Book of Genesis, which will drive biblical literalists to much "weeping and gnashing of teeth." I'm more tolerant of scriptural interpretations, but even I had a hard time with some scenes. The script gets many details right, but when it veers off track, it kind of goes over a cliff. Let's unpack that.

First of all, the movie has its basic facts straight. Noah is chosen by God to save creation. God is constantly referred to as "the Creator" in the film, which offends some people right from the first frame. I have no issue with this. God is "the Creator," yes? So let's move on.

The Bible tells us that Noah's father lived to a ripe old age, yet the movie quickly dispatches him in tragic, Disney cartoon fashion. Shem, Ham, and Japheth correctly appear as Noah's sons. However, in Genesis, all three sons took their wives aboard the ark. In the movie, only Shem has a mate. Ham is jealous, in a sort of Cain-and-Abel reprise. Inaccurate, but good for dramatic impact.

The screenplay gives Ham a motive for revenge against Noah in a plot line entirely outside of the biblical narrative. This tension leads to much suspense and bloodletting, so I suppose that's how the writer/director justifies it. To be fair, in the Bible account Noah has no spoken lines until after the flood. He is glumly portrayed by Russell Crowe with nary a single smile; if he didn't speak, he would be unbearably tedious. Noah's wife is peripheral in Genesis, which if followed to the letter would leave her largely out of the picture and deprive the viewer of a rich and powerful female lead played by Jennifer Connelly. All those omissions would make for a rather boring film, so the filmmakers have solved that problem with runaway creativity.

Another story line that has some people moaning is the Nephilim. These are the "heroes of old, men of renown." All we know of them is that they were "fallen" creatures, perhaps angels (in Hebrew, naphal means "to fall"), giants who made men appear "as grasshoppers." They appear in the film as gigantic, made-of-stone Transformers, which at times is unintentionally comical. But I heard the director interviewed, and he mentioned wanting to have some fun with the Nephilim. If so, I say "mission accomplished."

My biggest struggle with Noah is with the title character's motivation and intent. There is little mention of sin in the film, which the Bible tells us is the main reason God sent the flood to destroy humanity. In keeping with modern Hollywood ideology, "the environment" is the impetus for the catastrophe. The great evil is what man "has done to the world"--not what man has done to his fellow man. There is a subplot of destructive, greedy, industrialized villains and numerous scenes of ruined landscapes. Noah, a vegetarian, is the environmentalist savior of the animals. In fact, he seems to like them a lot more than he likes people. PETA should be pleased.

Aside from its many flaws, Noah is a visually stunning film that will hold the viewer captive from start to finish. And any film that can prompt curious movie fans to flip open a Bible in this secular day and age is worth a "go-see" rating.

Posted by Kathy Carroll at 9:54 AM

Congress shall make no law respecting an establishment of religion, or prohibiting the free exercise thereof...


There it is, plain as day, in black and white. The first statement in Amendment I of the Bill of Rights. Hands off religion, lawmakers. So simple, so straightforward, you'd think even Barbara Boxer could understand it.

But no. This is an "anti-women" position, according to Boxer--among other unintentionally hilarious reasons she gave why the Supreme Court should rule in favor of Obamacare and against the religious rights of the plaintiffs.

The objections came from near and far--far left, that is. Sandra Fluke called the cases "potentially catastrophic" in an indignant article only an attorney who dreads buying her own birth control pills could write. Gene Robinson, the gay priest who turned the Episcopal church on its head a decade ago, labels the plaintiffs "bigoted" against "sinners."

Robinson quotes, "Jesus wept." Yes he did, but perhaps not for the reasons Robinson thinks.

This is something I've noticed when debating liberals. They have trouble staying on topic. In this particular argument, they drag in women's rights, poverty, Catholics on birth control, gay rights, and other extraneous issues too numerous to mention. The crux of the case is this simple fact: the owners of the businesses suing the government don't want to kill babies. Their religious beliefs tell them that abortion-inducing contraceptives kill babies. It's wrong. And they don't want to be responsible for funding murder.

In all cases before the Court, the plaintiff businesses provide coverage for numerous other methods of birth control. But not abortion. What's hard here?

There is no "right" to Obamacare defined in our Bill of Rights, but the first right mentioned is religious freedom. So, do people of faith still have the right to free exercise of religion in our country? The Supreme Court's decision will tell us the state of our national soul.

Catholics are currently in the midst of the 40 days of Lent. We are each supposed to either give up some personal comfort as a sacrifice, increase our charitable giving, and/or do some extra good work. If we're feeling really ambitious, we try to do all three ("try" being the operative word).

This year, I'm trying a two-pronged approach. I'm doing my usual spiritual reading. This is no great effort for me, as I am both an avid reader and very interested in spiritual subjects. I've started with the best-seller Killing Jesus. This is the first of the Bill O'Reilly/Martin Dugard "Killing" trilogy that I've read, and it's remarkably well done. It's written in a very easy, conversational style and is fascinating in historical detail. I'm tearing through it, so I've queued up Open Mind, Faithful Heart by Pope Francis for the second half of Lent.

The second part of my Lenten exercise is giving up wine. This is a hard one. Although I only imbibe during weekend evenings, Friday/Saturday/Sunday, I do look forward to connecting with my wine glass and am feeling the void. Somehow, ginger ale and lemon water just aren't cutting it as a relaxing beverage to savor on DVD night. I tried this particular form of self-denial a couple of years ago and did fairly well; I lasted until Palm Sunday weekend. At that point I went to a party and the hostess, knowing my favorite party drink, handed me a glass full of aromatic red wine as soon as I arrived.

What can I say; I folded. As the Lord well understands, "the spirit is willing, but the flesh is weak."

I know I'll finish both my chosen books before Lent is over. As for not drinking any wine, that's a dubious goal. The annual March party is scheduled next weekend at my wine-pouring neighbor's home. I'll let you know how I do.
Posted by Kathy Carroll at 9:50 AM

Would Russia have invaded Crimea if we had a different president? We'll never know for sure.

What would you do to address Russia's aggression? How would you make Putin understand that his invasive actions against a sovereign neighboring nation will cause painful consequences to Russia?

There is so much commentary and analysis on the above questions. I suppose there are no easy answers. But I do know this much--if I were president, I wouldn't waste ninety minutes in one phone call and sixty minutes in another trying to reason with an opponent who obviously doesn't respect a word I am saying.

Instead, I would take about ninety seconds to outline my plan of action--on the first day of the invasion, not a week later. It would go something like this:

"Hello, Vladimir. I realize the Ukranian/Crimean crisis does not directly involve my country. But you're nothing if not a practical man, so I know you'll understand that we can't allow your aggression to stand unchallenged. Here are two steps I'm taking to protect my country's security and national interests:
"Good luck with falling energy prices, Vlad. Let's chat again after your next invasion."

End of discussion. Beginning of common sense. It works for me.

Posted by Kathy Carroll at 7:52 AM

Did you watch the Academy Awards last night? If so, did you see Hollywood old-timer Kim Novak and the synthetic wreckage of her face? Holy smackers. Could lines and wrinkles really be any worse?

Note to Kim: There are worse things in life than being 81. In fact, I think it's rather cool to be that age and a Hollywood legend into the bargain. Nobody expects you to look 25 years old anymore. You'd look much better if you left your face alone and let it match your hands--which obviously didn't get the Botox memo and have aged normally.

I used to think that, if I had the money, I might tune up my face. Now, I'm glad to be poor enough to leave well enough alone. Kim Novak, who struggled to move her mouth announcing an award for the film Frozen, is a walking "Don't Let This Happen to You" poster girl for aging naturally.

It's no secret that show business is often brutal to older women. Add to that harsh reality the fact that Kim Novak was absolutely beautiful when she was a young star. But "to everything there is a season," and few gifts are as fleeting as youthful beauty. Today's young stars will learn that soon enough.

Kim seems like a nice enough lady who probably has a lot of life experience and wisdom to share. At age 81, even in Tinseltown, that should be beauty enough.

Posted by Kathy Carroll at 9:05 PM