Statement by the President on the Occasion of Eid-al-Fitr

A Century of War

Today marks the 100-year anniversary of the start of World War I.

Especially in view of current events in the Middle East and Ukraine, this day's dark centennial reminds us of the dominance of human nature's enduring evil streak. Hundreds of millions of people have died in global conflicts during the past century.

Will there ever be an end to the strife? All these years later, the answer is still lost in the wind.
Posted by Kathy Carroll at 10:04 AM

The Islamists persecuting Christians in Iraq doesn't merit much mention on network TV news. Iraqi Christians have been threatened with death and driven from their homes by the fanatics. If it were Muslims fleeing Iraq to save their families' lives from Christians, I suspect MSM would find 30 seconds to cover it on the evening news.

This situation has been described by Iraq's Catholic leader as "worse than Genghis Khan." I wonder how heinous the persecution of Christians would have to be before it's considered newsworthy.

It's similar to the Israeli deaths vs. those in Gaza. The Muslim deaths get the prime coverage, right upfront at the start of the broadcasts and print news articles. Jewish deaths are mentioned briefly after detailed coverage of the Islamic casualties.

In global conflicts today, the deaths of Jews and Christians--whose religious philosophies represent the bedrock of Western Civilization--are somehow less worthy of thorough reporting than the deaths of those in the radical extremist religion that pledges to eradicate the West.
Posted by Kathy Carroll at 9:51 AM

When evil of the magnitude of the shoot-down of Malaysia Flight 17 occurs, the loss of human life becomes almost too much to contemplate.

There is something that writers call a "hook"--an anecdote or situation that draws you into a story and personalizes it for you. For me, that visceral connection came when I heard an NBC news reporter state that one woman had lost all four of her grandchildren. "I'm not a grandmother anymore," she is quoted as saying. I can think of no more devastatingly sorrowful fate. Grandchildren are our life's legacy, our crowning achievements. They are living proof and a true reward that all our hard work and sacrifice along life's rough roadway has been worthwhile--and they are a constant joy and inspiration in our later years. As the grandmother of three beautiful and precious grandchildren, I know I would gladly lay down my life to protect any of them from fatal harm. To lose any one of these life's treasures-- let alone all of them at once--in such a horrific atrocity, is beyond my comprehension and, I'm certain, more than I could bear.

I think of that unbearably bereaved woman, and I pray for her. Because I know, if I had to walk in her shoes, I would long for the sweet release of my own death to free me from my eternal grief.
Posted by Kathy Carroll at 10:50 PM 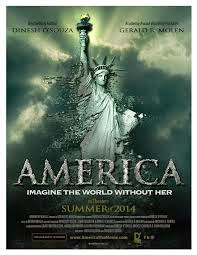 I saw the movie America: Imagine a World Without Her, and I give it a go-see. It's definitely a thought-provoking presentation of how indoctrinated the United States has become in viewing its national history negatively. Quite predictably, it has lefties wailing and gnashing their teeth.

It makes me wonder, why would so many forces--academia, media, terrorists, politicians, and aspiring leaders--have such a coordinated vested interest in rendering the greatest success story of Western Civilization worthy of contempt?

Perhaps because evil is dedicated to the destruction of good?

The movie includes coverage of the 20th century left-wing leader Saul Alinsky, whose disciples include Barack Obama and Hillary Clinton, wrote the leftist bible Rules for Radicals. Alinsky dedicated that book to Lucifer--although Alinsky himself, who was born Jewish, is documented as either an atheist or an agnostic, depending on which source you read.

In the New Testament, Lucifer is described by Jesus Christ as the "father of lies." Just some food for thought on a summer's day.

Posted by Kathy Carroll at 9:56 AM

I've been taking a "life break" for awhile, just enjoying family and friends. It's been a remarkably eventful five weeks, and unfortunately most of the news is bad. So this was either the worst or the best time to be offline.

It's almost impossible to find a jump-off point on world and national events, so I won't even try. But two significant days in June must be acknowledged before I can allow myself to move forward. The 70th anniversary of D-Day was commemorated on June 6, and Tony Gwynn, one of baseball's all-time greats, passed away on June 16 at the age of 54.

From everything that has happened, how did I pick those two events? Because both represent so many of the good and inspiring qualities of the best of the United States as a country, as well as the best of individual Americans. Both the victory of our valiant D-Day heroes and Tony Gwynn's professional and personal success, along with his final battle with cancer, embody courage, commitment, dedication, a sense of honor and duty, a determination to succeed, a quiet faith, and a humble acceptance of the challenging, often tragic aspects of life. All of these qualities contributed to making America great.

I hope it's not to late for us, as a culture, to recapture our noble and winning spirit. Our D-Day veterans are vanishing into history, and Tony Gwynn personified an old-fashioned sports idol whose actions on and off the baseball field made him worthy of the adulation he received. Despite the problems in our government and the world, I suppose a true American must always believe that a positive outcome is possible, no matter how grim our circumstances may seem. Believing in happy endings is a tough exercise at the moment. But that doesn't give us an excuse not to try.

Posted by Kathy Carroll at 5:45 PM