A Rule for Good TV

For more than a decade, there is only one television show that I simply can't miss: NCIS.

Because of NCIS, I never watched a single episode of American Idol. It was scheduled opposite NCIS--no contest, you should pardon the expression (and I don't feel I missed anything). In the early years, the sizable chunk of hard-core NCIS fans kept the show viable during "Idol's" blockbuster run. 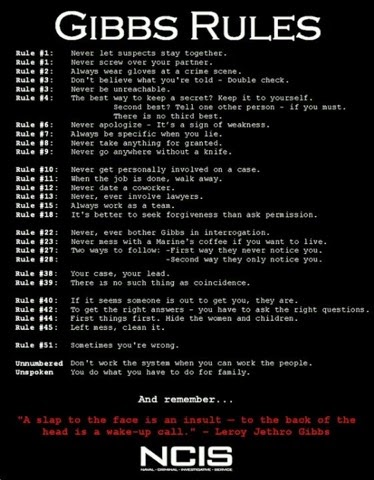 NCIS features smart, well-written scripts with an imaginative and interesting ensemble of characters that has evolved considerably over time. Yes, it's formulaic, but it's hard to name a TV drama that isn't. The difference with NCIS is that the characters are more interesting than the plots, which are top notch. From taciturn team leader Gibbs, to historical tidbits buff "Ducky"--Dr. Mallard, the medical examiner who talks to all his corpses--to movie trivia expert/womanizer/wisecracker Agent DiNozzo, to amped-up Gothic laboratory princess Abby, personal backstories continue to unfold at a tantalizingly slow pace throughout the seasons.

As an example, "Gibbs Rules" are still being revealed, and not sequentially. We're still learning them, with some fan complaints of redundancy or skipping numbers. I don't mind the gaps or repetitions; I like how the characters repeat the applicable rules in various circumstances. Last night's episode, which featured team computer geek McGee learning from Rule 51: "Sometimes, you're wrong," pulled on the heartstrings while both working a case and keeping the Christmas spirit. The script actually made a reference to the birth of Jesus, talked about the "second chance" it gave mankind, and featured McGee opening doors on his Advent calendar. Bravo!

Posted by Kathy Carroll at 8:36 AM