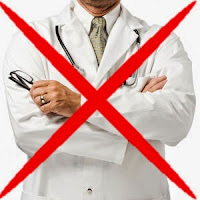 I've previously mentioned some of my beefs with "Obamacare," euphemistically called the Affordable Care Act. Since first signing up on January 1, I've learned that the federal subsidies that lower my premium to a payable amount each month are actually considered taxable income. So for 2015, I'll owe taxes on an additional $5,000 of income that I've never seen.

Only the government could call this "affordable." (Maybe they mean it's affordable for them?)

Today, more surprises were in store as I researched finding a new physician. It seems that my healthcare organization--one of the largest in California--doesn't cover my Obamacare policy. I asked if it was because I had the cheapest (excuse me, the most "affordable") version, the "Bronze" plan. The representative in the hospital's insurance registration office gave me an airy "No."

"Bronze, silver, gold, or platinum, it doesn't matter," she casually informed me. "None of our doctors participate in that plan." Well, pardon me while I go drop dead.

I suppose this is one sure way of reducing healthcare costs: make sure that no one gets insurance coverage to see a doctor. Brilliant in its simplicity, stunning in its stupidity. NO-bamacare--a prescription for American healthcare's total collapse.

Posted by Kathy Carroll at 7:32 PM