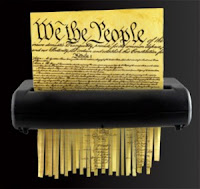 
The Supreme Court decision on gay marriage has made it official. We are now a nation of men, not a nation of laws.

Amid all the gloating and crowing by proponents, the big picture has been lost. This ruling solves nothing; the same people who disagreed with gay marriage before the decision still do. The only difference now is that the people's right to govern themselves has been usurped by half a dozen black-robed rulers. The decision makes us a weaker country and further endangers our liberty, most specifically the right to free expression.

We've already lived this nasty aftermath for over forty years with Roe v. Wade, the case that legalized abortion. While that issue was working its way through state-by-state processes, the Supreme Court's sweeping judgment lifted the matter out of the citizenry's hands, and the contentiousness and strife over legalized abortion still rages today. It probably always will. Thought control cannot be mandated via governmental decrees, no matter how well intended.

So the argument is not over, regardless of how the "tolerant" progressives insist that those who disagree with the validity of gay marriage just shut up and sit down. The problems with gay marriage are only beginning. Watch for increasing intolerance and censorship against churches and other groups or businesses that have a philosophical or theological difference of opinion. Never content with today's victory, the leftists demand complete agreement with their positions or label those with another viewpoint "a bigot." Then they go after them, with deliberate intent to ruin their lives and careers.

In the last century, the intolerant dominating forces were called Communists or Nazis. What would we call those forces today? As the chief justice rhetorically asks, who do we think we are? I'm not sure anymore who we Americans are. But I do know this--we are not free.