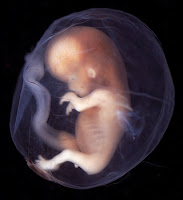 By now most of us have heard about the blood-chilling Planned Parenthood videos. They have had a wide audience, although you'll never hear it from mainstream media coverage.

Some of us can't bring ourselves to view the carnage. The article linked here is a rebuke to those who have chosen not to watch the horror of the Planned Parenthood videos. I'll freely admit that I'm one of those cowardly people. I just can't watch defenseless unborn babies being carved into carefully-crafted pieces, their tiny organs sold off to profit their nonchalant butchers. "Line items," I've heard that the Planned Parenthood butchers in the videos call the body parts. And now in a fifth video, the butchers tout "intact" fetuses for sale.

This is beyond sickening. It's evil. I've heard and read enough gruesome descriptions of the "baby death care" videos to know that they tell us truths we don't want to hear. Is this what we have become? Are we really now a nation not at all subject to, or even concerned about, "the Laws of Nature and of Nature's God," but a depraved and disintegrating society that kills, dissects, and sells its young, then casually celebrates the deal over a glass of Chardonnay?

If so, we are in far worse condition than I had feared. I thought we had merely lost our way, that perhaps with hard work and discipline we could find our way back to a righteous path. But if we continue to tolerate such wanton slaughter of innocents as these videos depict, then we as a country will have lost far more than our direction. We will have lost our soul. I'm afraid there's no coming back from that.
Posted by Kathy Carroll at 9:29 PM