Oh what a tangled web we weave
When first we practice to deceive.
~ Sir Walter Scott (Marmion, 1808)

Is there a single voter left who has been paying attention to Hillary Clinton's past six months who does not think she is full of baloney?

I mean, really. For months on end, she insisted she did nothing wrong. We heard words like "aboveboard" and "transparent." She was adamant that she had been oh-so-careful with the information. A few days ago, when it became apparent that his ugly mess just won't go away, she was sorry that the voters were too stupid to understand the situation. When that disingenuous insult was received like the proverbial lead balloon it is, finally, at last, she's sorry she make "a mistake." Maybe we're finally getting somewhere? 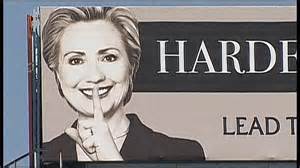 Look, I've held jobs with defense contractors. Even minor worker bees like myself were conditioned to understand the sensitivity of the data we were handling. I had to get a security clearance to work on government proposals. The documents were printed, copied, and handled in a secure room called a SCIF (pronounced "skiff"'), a government acronym for "Sensitive Compartmented Information Facility." No employee without a security clearance could enter the SCIF. When we used the SCIF photocopier, we were trained to run ten blank pages after each print job to erase any images that might remain in the inner workings of the machinery. This awareness of confidentiality was drilled into all employees and became second nature, a way of protecting the documents and the information we worked and were entrusted with.

But somehow, this vital and basic message eluded the Secretary of State, Hillary Clinton. She has put on a good show that she simply doesn't understand that, by reason of her being the nation's highest ranking diplomat, every single piece of communication in her world is, by definition, classified. If it's on the Secretary of State's computer, it's a secret. Anyone who's worked in a SCIF knows that.

Big surprise to Hillary? I don't think so. I think Mrs. Clinton is a lot of things, but stupid is not one of them. She knew she was violating procedure, possibly even endangering the country's national security--but she did it anyway for her own selfish political reasons. In addition to the hundreds of questions I have seen written about her "personal" email and her "private" server, I have never seen a commentator ask--why was the Secretary of State using her government computer in a "personal" and "private" manner? That's a very quick and easy way for a defense contractor worker bee to get fired.

So if the top diplomat in the country has no trouble playing fast and loose with our country's secret and sensitive information, should she become president? That's what the government seems to be asking, at last. But don't wait for the investigation to drag itself out. Ask any defense contractor worker bee with a security clearance that question, and you'll most likely hear a discouraging word for Hillary Clinton.

Hillary Clinton screwed up badly, continues to lie about it, and will eventually have to pay an uncomfortable price--possibly including a forfeit of her obsession to be president. I'm sorry if that's confusing to her.
Posted by Kathy Carroll at 7:11 PM