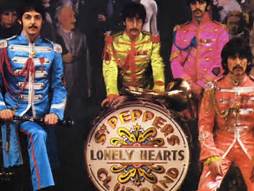 Diehard Beatle fans will probably know many of these factoids, but most were news to me. The Beatles were a pop cultural force of nature that I merely tolerated as a teenager, although over time I've been properly impressed by their impact on modern music. I wrote about them ten years ago, I'm writing about them today, and if I'm still here in another decade, I'll be marking the 60th anniversary of this landmark musical achievement colloquially referred to as simply "Sgt. Pepper."

In fact, The Beatles essentially invented what we today call "classic rock." What passed for "rock 'n' roll" in the early 1960s was the repetitive sound of a tired old genre circling the drain. The Beatles, with their creative innovations and their boundless talent--many would say genius-- changed all that. In their reverberating wake, rock music rebounded in so many directions and dimensions that it's still changing today.

Rock music more than "got by with a little help" from its friends, The Beatles. Happy 50th birthday, Sgt. Pepper. You indeed taught the band to play.
Posted by Kathy Carroll at 7:46 PM