Look Before You Help

We all want to help our Texas neighbors. In deciding where to donate toward Hurricane Harvey relief efforts, I like my tried and true charities for disaster relief: Catholic Charities USA and The Salvation Army. The Red Cross is very a very worthy charity, too, but I can live without the additional emails and snail mails I know I'll get if I begin donating there, also. (That's no doubt selfish of me, but that's a tangent for another post.)

Over the years, through disasters near and far, once I had settled upon these two charities that I'm comfortable with (and resigned to receiving mail from), I've stayed with them. 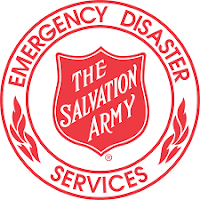 If you are planning to contribute to a charity in the wake of Hurricane Harvey, it's always worthwhile to remind ourselves that disasters bring out the worst in bad people. To be sure that our financial donation goes to where it should go to do the most good for the most people, a little research goes a long way. If you're new to charitable giving, be sure that the organization you choose is one you don't mind receiving endless correspondence from for many years to come. Because I promise you, they will never, ever lose your address.

However, emails, cards, and letters are a small inconvenience to bear in exchange for the huge feeling of spiritual satisfaction we will feel by doing something good to help others who are in urgent and painful need in our hard and hurting world.
Posted by Kathy Carroll at 8:08 PM

Robin Hood, Where Art Thou?

Victor Davis Hanson presents one of the most cogent takedowns of progressive hypocrisy I've yet encountered in "Silicon Valley Billionaires Are the New Robber Barons." Nothing underscores our current era's frightening lack of critical thinking skills than the following jarring observation:


In the case of the cobalt mining that is necessary for the production of lithium-ion batteries in electric cars, thousands of child laborers in southern Africa are worked to exhaustion.

Oh yes, little clown-car drivers. Don't be so smug about "going green." Laptop and i-Phone users, be aware. Follow the money and you'll find that the human cost of our trendy conveniences is quite considerable.
Posted by Kathy Carroll at 10:07 AM

We, as a nation, are in such a very bad place right now. The horror and evil of the Charlottesville atrocity underscores the darkness that is currently obscuring our American spirit. I've read dozens of articles today, but this one by Robert Tracinski, "Notes From Charlottesville On Our State Of Emergency," is the best I've found. In comparing the "white supremacists" and the "antifas" (the new trendy term for "anti-fascist"), Tracinski notes:


The two sides are mirror images of each other, and both have an interest in making our politics devolve into street fighting. Both sides have also been priming their people to be ready to kill for the cause...

This is all true. Seriously, if someone is waving a swastika flag or a communist flag, as they were Saturday in Charlottesville, what's the difference? The only difference, as the old joke goes, is the uniforms. These are both evil, totalitarian, intolerant and violent ideologies that have absolutely nothing to do with American values. In fact, they have caused the deaths of untold numbers of Americans who fought against them. Furthermore, the USA defeated both of these failed ideologies at great cost in blood and treasure. So if you're fond of the Nazi or Soviet flags, go wave them somewhere else. No true American wants anything to do with your hatefulness. It's an insult to all those who died to protect and preserve our freedom.

Also worth reading are Hugh Hewitt's observations in "The Charlottesville driver isn't the only one who should lawyer up." Speaking from his experience as a constitutional law professor, Hewitt explains the criminal culpability of those participating in the protests. It's eye-opening, and I can only hope there are indeed many prosecutions against the instigators and perpetrators of Saturday's violence.

The United States has not been in such terrible condition since the 1960s. I hope we can get a grip soon. We can't stay too long in such a bad place without incurring permanent damage.
Posted by Kathy Carroll at 6:59 PM

I rarely recommend anything published in The New York Times. Frank Bruni's "I'm A White Man. Hear Me Out." stands as a worthy exception.

Intolerance is a hot topic in today's headlines. Whether it's a Google firing over an unpopular viewpoint, violence over political differences, or being shouted down due to philosophical differences, we Americans are behaving with increasing immaturity and irrationality in the face of opposing opinions. Black, white, left, right--we are, all of us, much more than the sum of our parts. Too many of us have forgotten that fact--or worse, we have never learned it. We are, each one of us, responsible for the decisions and actions in our own lives. It is our own choice to protest, to counter-protest, to speak out on one or the other side of an issue.

Screaming into the wind accomplishes nothing except making noise. It is not the fault of the president or the police if things go badly due to our own actions. If we decide to take a principled stand, we had best be prepared to accept the consequences. Results won't always break our way. The fact that things don't turn out as we want them do does not automatically equate with hatred, oppression, or racism. Occasionally we need to accept the challenging idea that we may have been wrong.

All of us will be wrong, sometimes. Hopefully, that's how we learn. If we learn, we grow. That's a reality of life.
Posted by Kathy Carroll at 4:44 PM 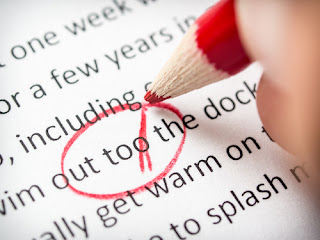 When I was a college English major back in the murky mists of the 20th century, I took a course titled "Advanced Expository Writing." It was a demanding class that required a weekly submission of an 800-word typewritten essay in an assigned category.

Father Bede, the veteran professor who taught this course, was an onerous taskmaster. One spelling or typographical error equaled a ten-point deduction--and 70% was a passing grade. A student learned to be very careful very quickly in preparing assignments for Advanced Expository Writing.

The professor had his own customized style sheet for corrections and comments, one that made a copy editor's marks sheet seem simplistic. This lengthy reference document was distributed to all students on the first day of class to enable us to decipher his entries on our graded papers. One of his favored mark-ups, at least in my experience, was "BWN"--better word needed. I received numerous "BWN" notations over my questionable word choices until I learned to be very cautious and think critically about the adjective/adverb I was choosing.

Today I often remember Fr. Bede's exacting requirements as I read or listen to (what passes for) news reports. There are several words that are used endlessly by the media that could use BWN corrections. Two of my pet peeves are "chaos" and "desperate," both overused by all news outlets to a nauseating and very tiring degree.

According to Merriam-Webster's dictionary, "chaos" primarily defines the "confused unorganized state of primordial matter before the creation of distinct forms," or secondarily "the inherent unpredictability in the behavior of a complex natural system...." The third definition of chaos is "a state of utter confusion" or "a confused mass or mixture." This last (least emphasized) meaning has more relevance to current events, but not every day, in every situation, regarding every person or event in the current president's administration. Someone being fired, a vote failing, a change in policy, a few Tweets at dawn, are all automatically described as "chaos." This is lazy writing at best and deliberate misrepresentation at worst. "Chaos?" BWN.

As for "desperate," that word is defined as "having lost hope," "moved by despair," "involving...extreme measures in an attempt to escape defeat or frustration," "suffering extreme need or anxiety," "involving extreme danger or possible disaster," or "of extreme intensity." Everything being reported from the nation's capital, it seems, is a "desperate" attempt--to get votes, to limit an investigation, to shore up support, to change the subject. It's exhausting. It's also enough to cause one to lose hope and be moved by despair. "Desperate?" Stop being so dramatic. BWN.

In my own desperate attempts to avoid the chaos of today's daily media meltdowns, I've taken to avoiding television network newscasts and all major newspapers. "Disconnected?" If a better word is needed, it might be "bored."
Posted by Kathy Carroll at 5:24 PM