One Hundred Years Ago Today 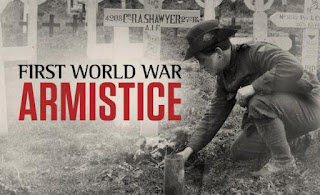 On the 11th day of the 11th month of the year 1918, at 11:00 in the morning, the Armistice ending what was called "The Great War" was signed into place. Nearly 20 million people, military and civilian, had perished in the conflict.

Victor Davis Hanson's article presents in clear and simple terms why The Great War was succeeded in a mere two decades by a far bloodier worldwide conflict. He also cites some ominous conditions in the current state of international relations, and notes that "It is also always unwise to underestimate a peaceful America."

Winston Churchill wrote of the "gathering storm," in observing the factors contributing to the second World War. Students of history would do well to study his writings today. We should all be tuned in to the current global weather forecast, and that's not a reference to climate change.

Posted by Kathy Carroll at 9:26 AM