Pathetic, in Any Language

¿Viste el debate? No, yo tampoco. Oh, excuse me...what I meant to say was, did you watch the debates? No, me neither.

And I'm glad I didn't, because snips of it were trapped in a continuous do-loop of sound bites all the live-long day. Immigration seems to have been a big theme, with several candidates breaking into Spanish to address voters. Way to unify the country, Democrats. Pander to the illegals, not to the lawful citizens.


Do these presidential hopefuls truly believe that Americans--and I include Hispanic citizens--won't see through this condescension? You can call it patético, or you can call it pathetic, but everyone understands when they're being patronized. From what I've heard from the debate so far, I don't think President Trump has much to be concerned about when it comes to the 2020 election.


Is last night's collection of characters really the best we can do for presidential candidates? And, as if last night hadn't been painful enough, a second debate is being televised tonight. Nobody can tell me Americans aren't strong.

Iran, Iran, but I Got Nowhere

President Trump knows better than anyone what will happen in the wake of Iran's attack on a US drone. No matter what course of action he takes after Iran's shooting down of a United States military asset over international waters, he will be criticized and condemned as a threat to national security.

If Trump takes action--any action--against Iran in retaliation for this blatant act of war, he will be blasted by Democrats and their media partners as a dangerous warmonger. If he chooses to take a wait-and-see approach with no immediate response, he will be labeled an ineffective windbag, a paper tiger whose word means nothing.

So, as usual in the current political climate, the president can't win. He never gets a moment's credit for the flourishing economy, the stock market boom, the jobs explosion, the foreign affairs accomplishments with North Korea and Mexico. You'll never hear anyone mention that he foregoes his annual salary--and I don't care how rich he is. It's his paycheck that he's giving up.

When he opens up and speaks to reporters, they use anything he says against him in the most negative context possible. The House of Representatives doesn't do a lick of work except try to destroy his presidency. His really is the loneliest job in the world.

It's true, the president causes a lot of his own problems. I could do with less of the petty drama and juvenile outbursts. But there's no doubt that I feel much better about the safety of the country than I did three years ago.

President Trump has nothing to lose. The knowledge that he will be railed against holds no fear for him. He's not a politician; he's the president. His habit is to follow whatever course of action he thinks best for the United States, often in a surprising manner. You'd think Iran would've noticed that by now.

About twelve years ago, I was working in the Regulatory Affairs department at a medical devices company. The company's products were sold globally, and one of our customers was China. I had to become a notary public for this job because one of my duties was processing apostilles, the legal documents often required for international transactions.

At one point, we had a large sale pending with China, but my daily emails checking on the status weren’t being answered. My manager was constantly asking me for an update on the China order.

Finally, after about ten days, I received an email from a brand new contact in the PRC. It opened with the obligatory apology about being tardy. Then, with bone-chilling nonchalance, I was informed that recently "the minister of health was executed" and the necessary reorganization that followed had caused the delay. Moving right along, this most disturbing email of my life (so far) concluded with the statement that the signed documents were attached and a very polite "thank you." (You've got to love a happy ending.)

For a long while, I sat in stunned silence, rereading this message. "The minister of health was executed...." .That certainly explained why he was missing from the "cc" list. Just another day at the office in China.

Posted by Kathy Carroll at 8:54 PM

A Day Beyond Time


Most of us probably have a memory in our lives that seem to stand outside of time. Whenever we think of it, the memory is fresh, vivid, and enduring. If we're fortunate, it's a good memory. We relive the details of that moment as though it is happening now. It's a life moment beyond the reach of time.

I'm sure the soldiers who survived D-Day seventy-five years ago today carry that life moment as though it occurred this morning. No doubt they have remembered it, the friends they lost, and the horrifying things they saw, every day of their lives. These fragile men in their nineties, many walking with canes or sitting in wheelchairs, were the terrified teenagers and young adults who stormed the beaches at Normandy. These soldiers, barely past childhood, by the strength of pure courage, sense of duty, and devotion to their brothers-in-arms, forced tyranny into retreat and rewrote the history of Western civilization.

There aren't many of them left, these treasured heroes. But they are indeed "the pride of our nation...the glory of our republic," as President Trump so sincerely praised them. To a man, they seem to reject the honor. Like all heroes, each one refuses the title and extends it instead to their friends who died. Yes, the fallen soldiers are heroes. But we know, all of us who have lived in freedom, comfort and prosperity because of their unimaginable sacrifices--we know the survivors are heroes, too. For they have led long lives of honor, goodness, and integrity despite their life sentence of remembering with brutal clarity that horrifying day--June 6, 1944. D-Day. A day beyond time.

Posted by Kathy Carroll at 7:47 PM

A Book for the Season

“Show me the manner in which a nation cares for its dead and I will measure with mathematical exactness the tender mercies of its people, their respect for the laws of the land, and their loyalty to high ideals.”
~ Sir Wm. E. Gladstone

In between Memorial Day and Flag Day, coming up June 14, or perhaps by Independence Day on July 4, there's time enough to read Sen. Tom Cotton's fascinating book, Sacred Duty: a Soldier's Tour at Arlington National Cemetery. There is so much to learn within its pages.

In a past job, I was fortunate enough to work closely with a decorated Vietnam veteran who had once served as a member of the Old Guard, the military regiment that serves at Arlington. He shared with me a very small piece of what Senator Cotton's book explores in detail. For example, in answering one of my questions, my U.S. Army veteran coworker explained how the soldiers serving at a military funeral know the exact moment to begin folding the flag in perfect unison.

For a more brief summary of the Old Guard's duties, read Senator Cotton's recent speech at Hillsdale College in Michigan. It's packed with little-known facts about both the Old Guard and what has been fittingly called our "national shrine," Arlington National Cemetery. Both the book and the synopsis are so worth reading--and remembering. 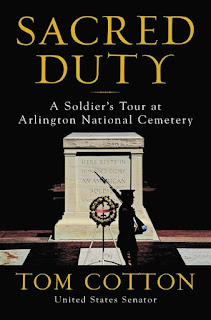