A Game of Numbers

There are more things in heaven and earth...than are dreamt of in your philosophy.

Not everyone is into signs and omens, and that's fine. But if you're not, I'd like you to consider some statistics from the baseball game that the Houston Astros played on the night they celebrated the Apollo 11 moon mission.

It was July 22, 2019, a game observing the fiftieth anniversary of Apollo 11. The Astros (their name is a play on the word "astronauts," of course) wore caps emblazoned with the Apollo 11 logo. They were paying homage to Houston, their team's town and home of NASA mission control, in honor of the historic moon landing.

The setup is important; thanks for bearing with me.

On to the game stats:

If the recurring numbers in the statistics are all coincidences, then the moon is made of green cheese. Probably 11 gazillion pounds of it.
Posted by Kathy Carroll at 4:05 PM

Yearning for the Moon

We ran as if to meet the moon.

Fifty years ago today, I sat in my parents’ living room just before 11:00PM Eastern time, watching breathlessly as Neil Armstrong stepped off the lunar module’s ladder and into history. I remember it like it happened last night.

For anyone old enough to remember living through them, the 1960s were a fraught and fractured decade. In many ways, that time was more perilous than today’s political polarization. The Cold War between the Soviet Union and the Western world stoked the fear of nuclear war. The Vietnam conflict raged and grew more bloody and controversial, inciting a bitter and passionate anti-war movement that divided and demoralized the entire country. Between the fall of 1963 and the spring of 1968, three national leaders, all full of hope and a promise of better tomorrows--President John F. Kennedy, Rev. Dr. Martin Luther King, and Robert F. Kennedy--were all brutally assassinated, shot down in their prime.

The Civil Rights movement caused terrible social unrest, violence, and many deaths. In 1965, the lingering curse of racial strive erupted in destructive riots in Watts, a Los Angeles neighborhood.. Race riots continued in Detroit in 1967, and in many U.S. cities throughout the decade.

In 1968, almost exactly one year before the moon landing, there were violent riots in the streets at Chicago’s Democratic presidential convention protesting the Vietnam war. Demonstrators, as well as news reporters and doctors who had come to assist, were beaten and gassed by police. In the 1960s, it seemed as though America would never be at peace, either at home or abroad.

Throughout this turbulent decade, 1960-1969, one shining silver thread ran its unifying way throughout the dark tapestry of domestic angst and upheaval: the NASA space programs. The initial Mercury program was proof of concept that we could put astronauts into space and orbit around the earth and see them successfully return. The Gemini program, with its dramatic “space walks,” followed as practice and preparation for astronauts who would actually visit the moon. The Apollo program had the actual moon landing as its mission; it was not without its tragedies. But the U.S. persevered in its mission; that's what Americans do. The vast majority of Americans in the 1960s, despite all their dramatic differences of opinion, were enthusiastic supporters of the space program. It seemed to be our national candle in the darkness, a light we could all see and focus on together.

It was in 1961 that President Kennedy had pledged to put an American on the moon by 1970. It happened. Americans reached for the moon, and we touched it. It is an enduring achievement of which every American should be immensely proud.
Posted by Kathy Carroll at 4:02 PM

The Mad Days of Summer

I've noticed a theme in the news this summer; have you? It seems everyone's angry.

A lot of people--most of whom have a lot to be happy about, if they only would stop to think about it--are wasting a great deal of time and energy in this supposedly carefree season being absolutely furious. Joe "Come on, man" Biden is angry at Kamala Harris over the debate smack-down. The foul-mouthed, spoiled brat soccer star Megan Rapinoe is angry at President Trump for daring to invite the team to the White House. Rep. Ilhan Omar is angry at Tucker Carlson of Fox News, and Carlson is angry right back at her. The ever-entertaining Alexandria "AOC" Ocasio-Cortez is angry at Nancy Pelosi, who in turn is fed up with AOC's nonsense. It's all very tiring.

Of course, the word "racist" comes up in just about every story. Didn't the media/politicians/elites/celebrities get the memo yet? Americans are over and done with this played-out old platitude. Most of us aren't racists. We know it, we know the media knows it, and we're sick of it being trotted out with almost every headline.

It's July, for corn's sake. Summer's finally here. Take a swim in the pool. Go to the beach. Ride your bike. Do some yardwork. Sit out on your patio. Visit with friends. Have a barbecue. Eat some peaches. And by all means, turn off the news.

A special note to disgruntled politicians, outraged reporters, and offended sports stars--you should take some time to count your money. Who knows? That might cheer you up. And please, all you steaming summer malcontents, try to simmer down. If you don't, it's going to be a long, weary haul until Labor Day. 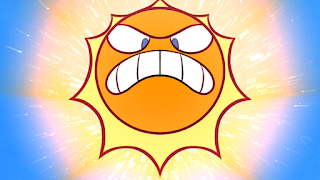 Posted by Kathy Carroll at 8:53 PM


"I pledge allegiance to the flag of the United States of America, and to the republic for which it stands, one nation under God, indivisible, with liberty and justice for all."

Posted by Kathy Carroll at 7:51 AM

A couple of posts back, I commented on how President Trump can never do anything correctly as far as Democrats, the legacy media, and various other elites are concerned. He is bad news no matter what he does, and reactions from the left to his response to Iran and his overtures to North Korea are further proof that Trump can't win.

In the Iran situation, he called off an air strike minutes before it began because he decided that the human cost was too great. The president thought that one hundred and fifty dead Iranians was not "proportional" to what Tucker Carlson of Fox News called "a broken robot." So much for the warmongering, wild-eyed maniac in the White House that is "temperamentally unfit" to be president.

Of course, now the chorus of critics claims he's indecisive, he's playing a dangerous game, he's giving mixed signals. Call me crazy, but I find the signal very clear--if you kill Americans, Iran, the next time will be different. But then, nobody asked me.

With North Korea, this president is breaking ground that was unfathomable even three years ago. We don't know if it's going to pay off, but there have been remarkable strides. Trump got them to the bargaining table; North and South Korea leaders are now talking to each other; and this past weekend, Donald Trump became the first sitting American president to step foot in North Korea. I find the newly minted breaks in the North Korean logjam under this president to be especially impressive. Democrats and media talking heads are not impressed, though. Because he actually seems to be making measurable progress with North Korea, the verdict from the lefties is in: Trump admires authoritarian dictators.

It's all very wearying. It must take a great deal of energy to constantly recast every presidential action as a doomsday event. It's time and energy that could be better spent getting the country back on track with infrastructure bills, a decent budget, immigration and healthcare reforms, focus on the opioid crisis, among other national priorities.

But listen to me, wishing that politicians would actually do their jobs. It's like waiting for the Democrats and/or the media to say "good job" to the president.

Posted by Kathy Carroll at 8:46 PM