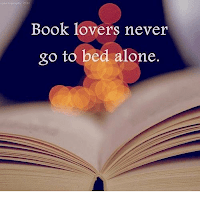 I'm so tired of the news, aren't you? It's just downright depressing. This is summer time, we should be enjoying ourselves. So let's talk about books!


Aside from instilling in me a devotion to Christianity, the best thing my father ever did for me was teaching me to love reading. Dad was a natural teacher, and starting in my toddler years he used bedtime stories as cleverly disguised lessons. By the age of four, I was a beginning reader. As I got older, I started reading on my own before bedtime, and I've never stopped. Reading is my sanctuary, my therapy, and my continuing education.

For the past few years, I'm usually reading several books at once. I haven't read multiple books simultaneously since my college years as an English major; but, hey, I'm in my sixties now. So many books, so little time. The advent of the e-reader has facilitated this multi-reading experience; I'm usually toggling downloaded books along with hardcovers and paperbacks. It's great fun.

For decades I would read novels almost exclusively; but now, I find I'm leaning more towards non-fiction. I think this transition manifests a need to learn all I can before I begin forgetting everything I ever knew. That's just my theory. Anyway, below are a few books I've enjoyed since June:


The Last Year of the War, by Susan Meissner
This is a novel that doubles as a history lesson. It's the story of a German-American teenager whose family is sent to an internment camp during World War II. She forges a lifelong bond with a Japanese girl in the camp, and the tale unfolds around their enduring friendship. Written in the first person, the story is told with impressive historical detail and haunting poignancy.

Killers of the Flower Moon: The Osage Murders and the Birth of the FBI, by David Grann

This is a grim documentary of a forgotten and shameful period in early 20th century American history. The abuses and crimes that were perpetrated against the Osage people are sickening and horrific. But the author gives some very late justice by bringing the atrocities to light.

Knowing: Memoirs of a journey behind the veil and choosing joy after tragic loss, by Jeffrey Olsen

I'm a bit of a nut on near-death experiences (NDEs), and this was the most dramatic one I've found. How do you go on living after half of your family has been killed in a tragic accident? The author, armed with insights from the mysterious beyond, explains how he rebuilt his life.

This summer I've also reread a couple of books I especially love:

The Art of Racing in the Rain, by Garth Stein

Before I went to see the recently released movie, I wanted to refresh the story in my mind. It was like revisiting an old friend. (Kevin Costner sounded very much as I had imagined Enzo would.)

A Grief Observed, by C.S.Lewis
When a former coworker was recently widowed, I recommended this book to her. It was my guidebook the year my husband died. I read it several times then and reread it again last month. I doubt it's possible to read too much of C.S. Lewis.

Below are books in progress now:


The Egg and I, by Betty McDonald
I remember seeing this hardcover book in my parents' mahogany bookcase; I'm reading it on my Kindle. A lighthearted classic from the mid-20th century, it wouldn't be published today--too politically incorrect--but if you have a sense of historical perspective, it's quite enjoyable.

Things That Matter: Three Decades of Passion, Pastimes, and Politics, by Charles Krauthammer
This book groups thirty years of Krauthammer's writings into sections of what is important in life. I miss Charles Krauthammer--his calm intelligence, quiet confidence, and wry humor. This book is like bringing him back for a one-on-one visit.


Knowing that I love to read, friends often loan me books. The two below are "on deck" on my nightstand:


Eve: A Novel, by Wm. Paul Young
Young is the author of The Shack, which I read when it was first published. I enjoyed it, so I'll give Eve a go.

House Rules, by Jodi Picoult
It's been quite a few years since I've read a Picoult book, but I trust my friend's "thumbs up."


With several pairs of reading glasses stashed both upstairs and downstairs, it appears I'm set for happy reading straight through Labor Day weekend. May you be so fortunate.