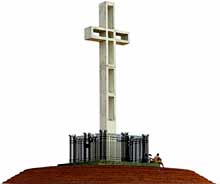 ...this nation, under God, shall have a new birth of freedom -- and that government of the people, by the people, for the people, shall not perish from the earth. ~ Abraham Lincoln

Yesterday's ruling by U.S. Supreme Court Justice Kennedy provides a ray of hope for the 76% of San Diegans who voted to keep intact the cross that's part of the beautiful veterans memorial atop Mount Soledad.

A cross has graced that scenic hilltop for nearly a century. The current cross has been part of the memorial since the mid-1950s. Prior to that, two earlier crosses adorned the hill. The first cross was erected in 1913, a second in 1934. I've posted a family snapshot of the second cross, taken by my mother during a visit to San Diego in 1942.

No one seemed to have had a problem with any of the Mt. Soledad crosses until 1991. Shall one atheist be permitted to override the will of three-quarters of his fellow citizens? Time, and the high courts, will tell.
Posted by Kathy Carroll at 3:01 PM