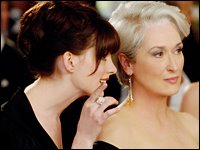 I saw "The Devil Wears Prada." It's difficult to assign it a genre, because to me it qualifies as a blend of documentary, comedy, historical drama, and horror.

Ah, yes. The Boss From Hell. I've certainly worked for her (shudder). She appears in my 2003 book, Working Over Time. You've probably had your own work experience with her, too. Remember? The boss who is phony, ruthless, joyless, unreasonable and impossible to please.

As is her wont, Meryl Streep sashays away with the film playing the b*tchy Miranda Priestly. Anne Hathaway gives a solid performance as Andy Sachs, the "little girl lost" in the brutal, big city business world, and Emily Blunt is a delightful surprise as the British "First Assistant."

If you've read and liked the book, you won't be disappointed by the film. And if you've spent any significant time working as an assistant, you'll recognize the hellish atmosphere that permeates the posh offices of "Runway" magazine. It's a state of being no amount of designer couture could disguise.

Posted by Kathy Carroll at 3:25 PM