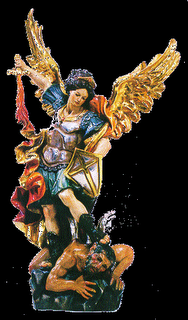 September 29, in the Catholic calendar, is the feast of the Archangels Michael, Gabriel, and Raphael. I'm an angel enthusiast, as any of my friends or family can affirm, so I pause again this year to commemorate the date.

As we Americans are in a protracted war that only seems to intensify, we specifically need Michael's assistance. As I posted last year: Michael, patron saint of police officers and soldiers, defends us against the powers of evil. He is considered to be the guardian angel of Israel, and he appears in the Koran, as well as both the Old and New Testaments.

In Michael, we find an archangel bound up in the histories of Judaism, Chrisitanity, and Islam, three major world religions that have converged at a cataclysmic crossroad in our lifetime. I think we all could use a bit of his heavenly help.

Michael's prayer is posted below. I have sent this to each of my adopted troops, on a prayer card that pictures Michael defeating Satan. So far, thank God, all my guys have come home safely. I like to give Michael a nod for their safety.

Prayer to St. Michael the Archangel

Saint Michael the Archangel, defend us in battle.
Be our protection against the wickedness and snares of the devil.
May God rebuke him, we humbly pray;
and do Thou, O Prince of the Heavenly
Host--by the Divine Power
of God--cast into
hell, Satan and all the evil spirits,
who roam throughout the world
seeking the ruin of souls.
Amen.