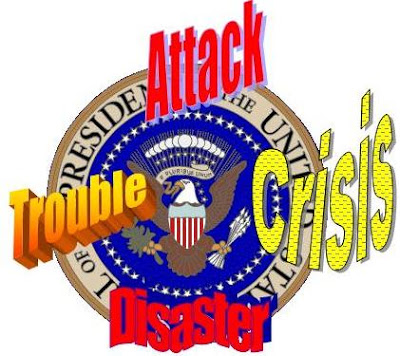 George W. Bush has made a boatload of mistakes during his two terms in office. There aren’t even many Republicans who will argue against that statement. But President Bush never seems to get any credit for his successes, most recently the stunning results of the 2007 troop surge in Iraq.

There have been other success stories in the second Bush presidency, which Hanson points out. He also underscores the fact that the enduring perils of our times await the next president and that, in many cases, these ominous realities pre-dated George W. Bush.

The looming international challenges of Russia, Iran, Al Qaeda, Kosovo, China, India, and Latin America won’t magically disappear when Bush leaves office. Today’s tragic headlines remind us of Israel’s pervasive problems, also. Ready or not, the next president will have to step up and deal with all of the global issues, each on its own urgent timetable. By definition, a crisis won't wait for a convenient photo-op moment.

Platitudes play well on the campaign trail, but actions are the stuff of the presidency. It's impossible to expect a human being, even one occupying such a lofty position as the President of the United States, to choose the correct action in every decision--especially if that decision is made under stressful circumstances or extreme time pressures.

It may be an inconvenient truth for our illustrious candidates, but those are the conditions under which most critical presidential decisions are made. In 2009, President Whoever will need to buy a helmet and buckle up when the new rubber meets the old road. He--or she--is in for a rough ride.
Posted by Kathy Carroll at 7:05 PM