Stars in My Eyes 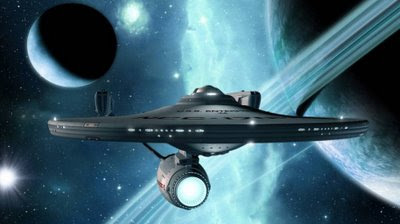 This post is for true Trekkies, the original fans who began watching Star Trek from its first “salt monster” episode, broadcast in 1966.  I am among those faithful.

titled “Star Trek,” with no subtitle, as though this was a new idea rather than the latest in a long line of incarnations and mutations of a 40+ year old show that has gone where no entertainment franchise has gone before.

I think “The Beginning” would have been a fitting subtitle.  If you’ve wondered how James Tiberius Kirk got his name or about his Iowa childhood, how Spock was raised on Vulcan, Uhura’s mysterious past, or how the whole Enterprise crew came together--and trust me, real Star Trek fans do wonder--you’re in for an informative treat.  All those questions, among others, will be answered in the course of this thrilling joyride through the space/time continuum.

Without spoilers, which would be a sacrilege in this case, I can safely relate that the casting is top notch.  Zachary Quinto is Spock.  He not only bears an uncanny physical resemblance to Leonard Nimoy, he has completely nailed Spock’s expressions, movements, and voice inflection.  Chris Pine, the young Kirk, while not quite a twin to William Shatner, captures all of his character’s key qualities.  You’ve got all of Shatner’s macho physicality, complete with brawling fisty-cuffs, frantic running, emotional outbursts--“AARRGGHH!!!”  “NOOOOOO!!!!”--fellow Trekkies, you know what I mean.

Pine also possesses the jaunty swagger, the self-satisfied grin, the brash cockiness of Shatner’s early Kirk.  And let’s not forget the sexual element, always simmering beneath the surface in the original TV series.  (Does any fan really think that Yeoman Rand was chosen for her GPA?) Pine’s Kirk pays robust homage to the dashing Captain’s eye for the ladies.

The comedic touches that lightened the television series are incorporated into the film with clever regularity.  And our favorite recurring moments are present, too.  You’ll hear Spock remark “Fascinating,” Bones will state that “he’s a doctor, not a...”  Well, I promised, no spoilers.

One of the best moments mirrors a favorite scene from an original TV episode.  Remember the spores that allowed Spock to act human and fall in love?  Of course you do!  It was one of the best Star Treks.  The antidote was to arouse emotion in order to kill the spores’ effects.  There is a situation in the movie where Kirk must anger Spock in order to achieve an objective. This scene of Kirk’s taunting, followed by Spock’s fierce reaction, will warm the hearts and memories of every true Trekkie.

Leonard Nimoy appears as Spock--later in time, of course.  It’s great to see him, even if his dental work gets in the way of his delivery at times.  (Was that a spoiler?  Well, I do want you to be prepared for that one.)

I’ve read that the cast has signed up for two more Star Trek movies (which, hopefully, will be subtitled), allowing this imaginative film creation to continue "to seek out new life.”  I would be willing to violate the Prime Directive in order to see the sequels immediately.  Like the current release, I know they’ll be great movie-going.  But a part of me will always miss the original Star Trek television series, with its cardboard boulders and rubber-masked monsters, when William Shatner’s Captain Kirk was preening smugly on the Enterprise bridge.

Take her out, Mr. Sulu.  Warp 3.  And thanks for yet another wonderful ride.