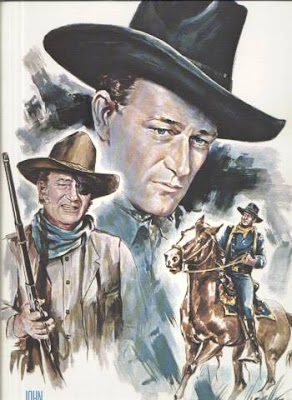 On this date in 1979, the legendary actor John Wayne died.  National Review has a wonderful tribute to him, linked here.  If you're a fan, it's a must-read.
I'm a John Wayne fan, mostly in self defense.  While I was growing up, he was a favorite star of my mother.  Then, early in my marriage, I learned that Pete held "The Duke" in even higher esteem than did Mom.  Consequently, both of my children were indoctrinated early into the John Wayne School of Movie Viewing.  Our family watched every John Wayne movie that showed up in the TV guide.
It's noteworthy that no matter who else is in a film with him, it's always referred to as a "John Wayne movie."  Even the great Katharine Hepburn couldn't compete with that fact.  Say what you will about his acting skill or lack thereof--the man had star power to outshine the Milky Way.
Among Pete's multiple John Wayne gift sets still gracing my video library are many classics, too numerous to list.  Wayne has over 170 film credits, and each fan has their favorites.  My top three are "The Quiet Man," "The Man Who Shot Liberty Valance," and my all-time #1 favorite John Wayne movie, 1948's "3 Godfathers."
After Pete died, I gave his DVD of "3 Godfathers" to his dear friend Dave, who happens to be my dear friend, too, as well as my godson.  (I sponsored Dave when he joined the Catholic Church over 20 years ago--but that's a story for another post.)
The backdrop of "3 Godfathers" is Christmas, but Pete and I had a tradition of watching it on Fathers' Day.   John Wayne, uncharacteristically cast as an outlaw and fugitive, by a twist of fate finds himself entrusted with an orphaned newborn baby.  I could probably recite every actor's dialog for this entire film; still, 4 years after my last viewing, I feel like it might be time to watch it again.
And there's Duke -- 3 Godfathers, on Netflix.  John Wayne may be dead 30 years, but he's far from gone.  Rest easy, pilgrim.
Posted by Kathy Carroll at 7:20 PM