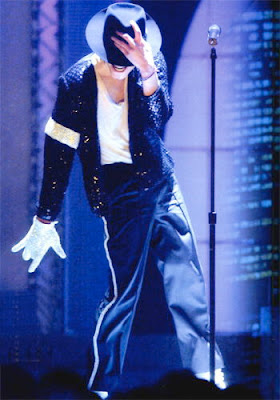 For all sad words of tongue or pen,
the saddest are these, "It might have been!"
~ John Greenleaf Whittier
We will never know whether Michael Jackson's upcoming  London concerts would have marked a triumphant comeback or a humiliating failure.  I like to believe it would have been the former, but my practical side fears it would have been the latter.  No matter now; he's gone, and the question will remain one of the imponderables.
What we do know for certain is that a world-famous entertainment icon, gifted with immeasurable talent and plagued by personal troubles, many of his own making, is gone forever.
We are left with two realities.  One is an almost psychotic media immersion in and fascination with Jackson's death.  This unfortunate fact, a sick sign of our celebrity-obsessed culture, will, thankfully, blow itself out, given enough time.  If the media spent weeks on Anna Nicole Smith, they will spent at least months on a star of Michael Jackson's magnitude, achievements, and longevity.
The second, more durable reality left behind is Jackson's body of work.  Whatever his considerable flaws and foibles, the "Man in the Mirror" had musical mojo for the ages.  His work will stand solidly, as is and on its own--for decades, if not for centuries.
Posted by Kathy Carroll at 4:42 PM